When my family travels, we like to experience off-the-beaten-path places that aren't too touristy. One of our favorite stops from our July UK trip was a visit to this tiny Scotch Whisky distillery in the tiny village of Pitlochry. We were taking a day trip from Edinburgh to Inverness, and we planned a stop at Edradour Distillery on the way north. Edradour is a Highland single malt whisky distillery that offers tours and tastings. Distilling since 1825, they pride themselves on their authentic, small scale production of a high-quality scotch whisky. 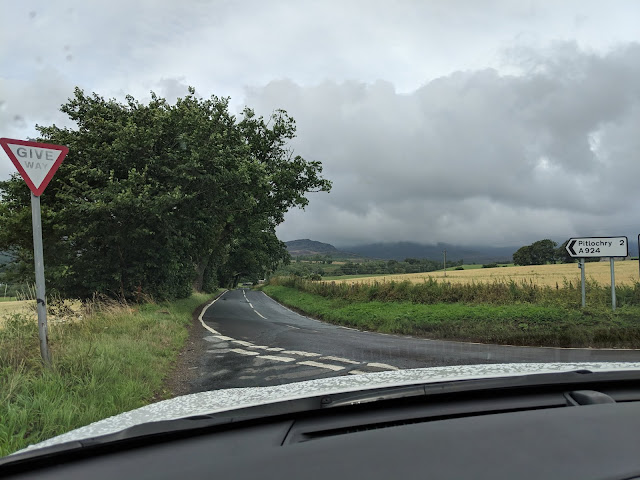 It was a rainy day, which I was hoping for on our trip to the Highlands! We arrived, took some photos, and registered for the tour. 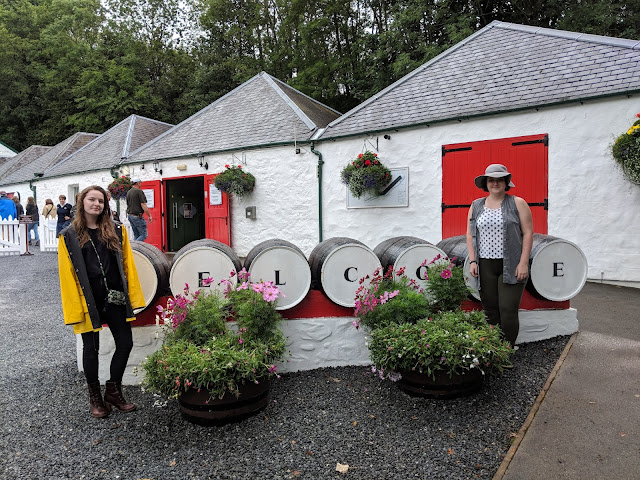 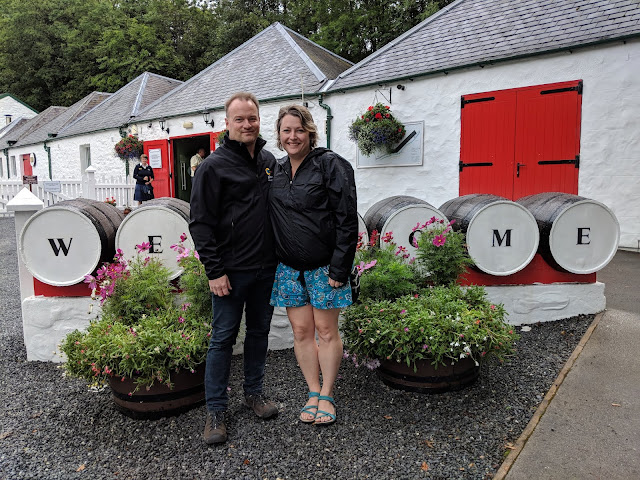 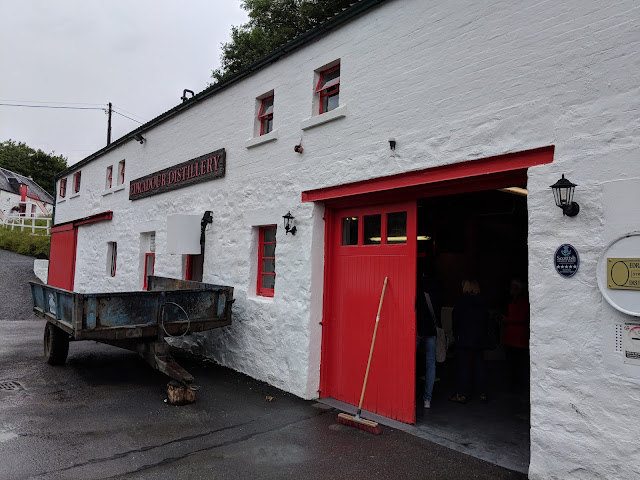 After paying our admission fee (10 GBP per person), we were ushered across the stream to this adorable building, where I took some more photos. Inside, there was coffee and tea for purchase (you can keep the mug!), plus displays and a photo timeline that told about the history of Edradour and the making of single malt whisky. 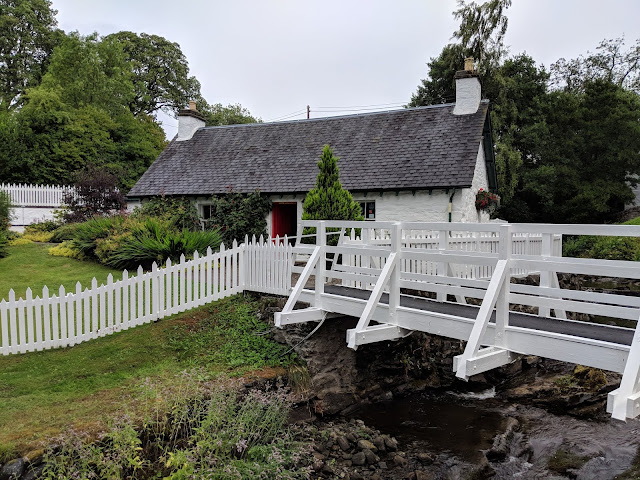 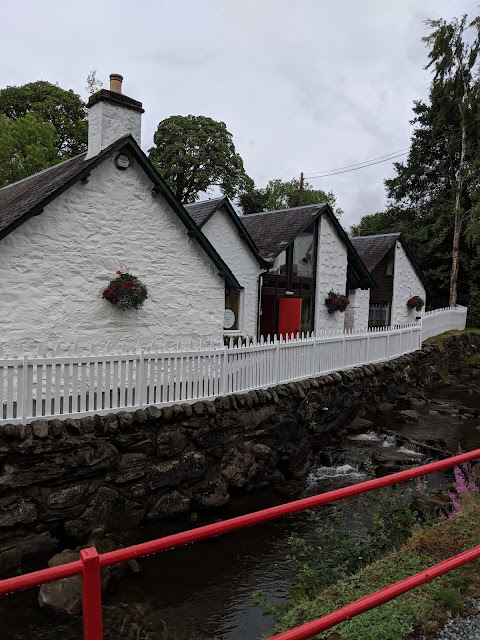 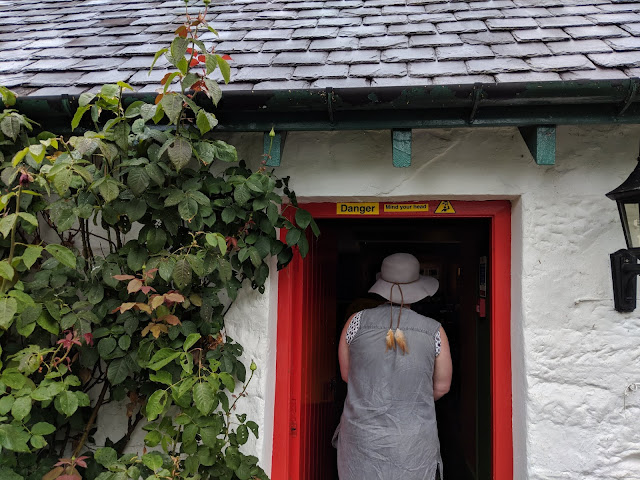 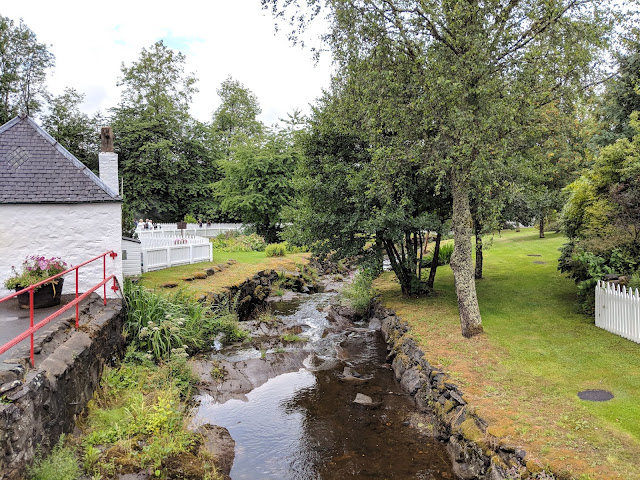 We only had to wait about ten minutes until our tour group filled up, and then we were on our way! We walked back across the stream and up the hill to the distillery, which is the building you can see at the center of the photograph. 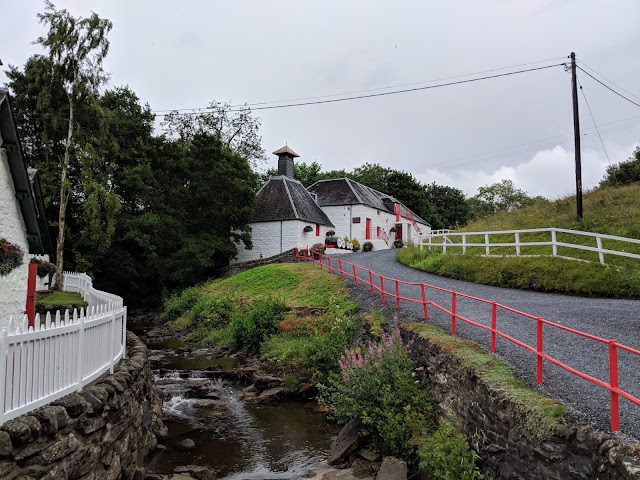 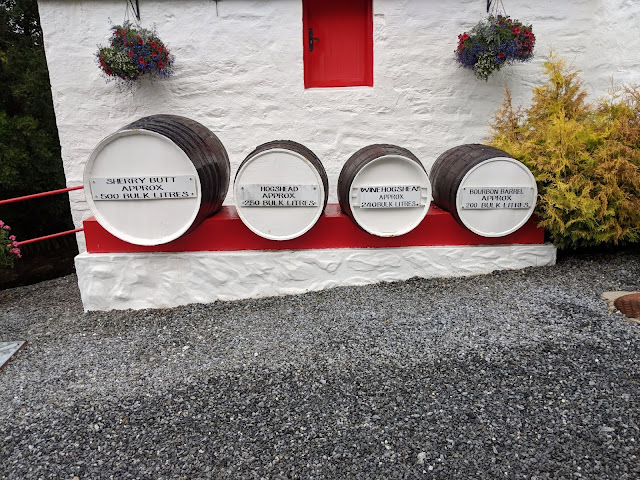 Ruth was the perfect tour guide; passionate about scotch and very knowledgeable. We were each given a sample of their 10 year malt, and were asked to choose a sample of either their peated scotch (Ballechin), or their cream liqueur. We made our selections and found a seat. 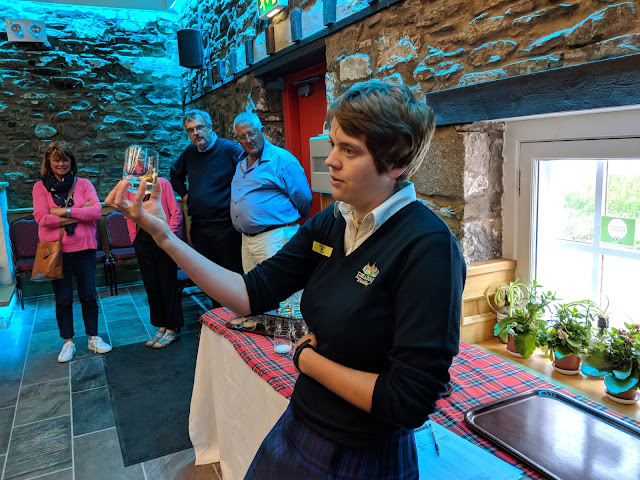 It was our youngest daughter's 18th birthday on this day, so she was pleased that she could participate in the tasting with us. 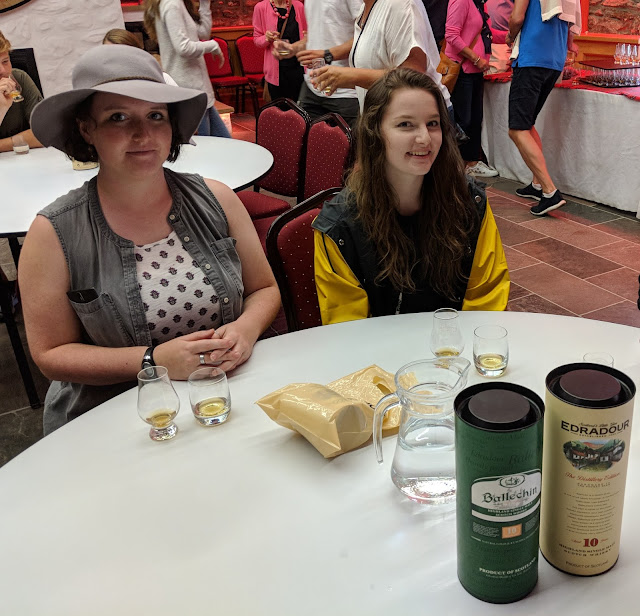 We all chose the Ballechin to have with our 10 year single malt. Both were lovely. We got to keep the etched tasting glass as a souvenir, which was a nice surprise! 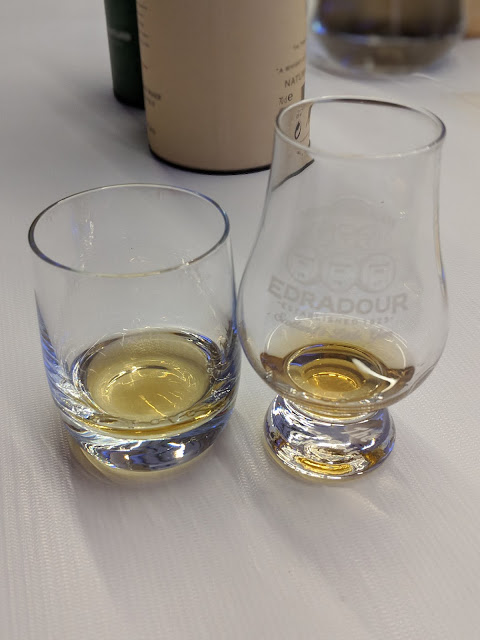 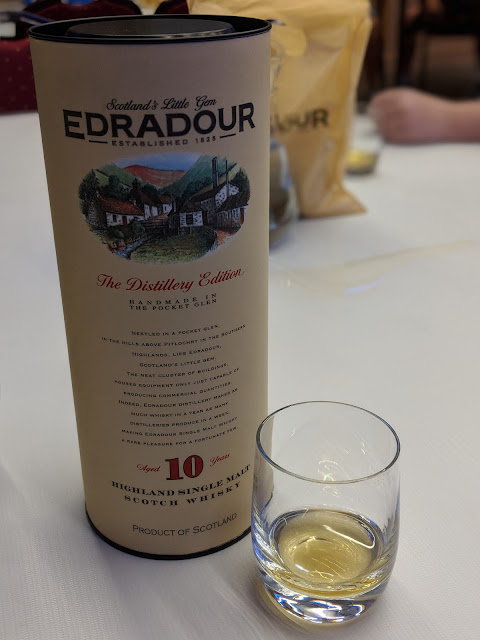 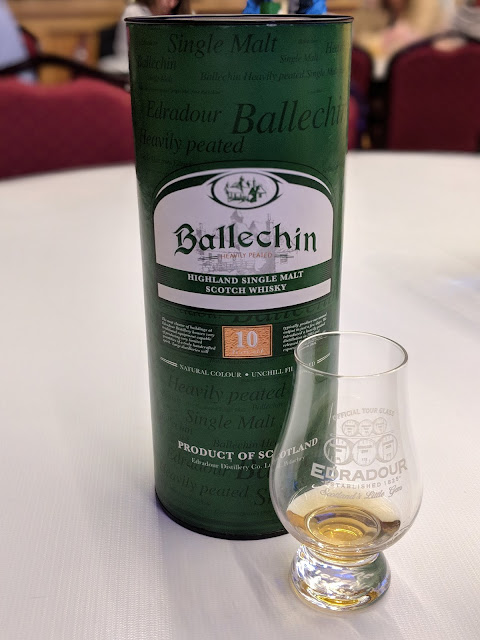 The photo below is dark because we were watching a ten-minute film about the history of Edradour while enjoying our samples. 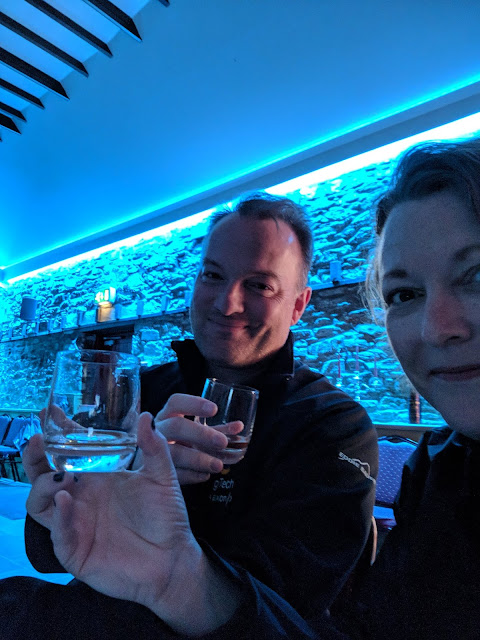 After our tasting, we moved on to see the distillation process firsthand. Ruth said that if we were "feeling peckish," we could snack on some malt while we walked. It was surprisingly delicious and tasted like Sugar Smacks cereal without the sugar. Ruth explained that they order their malt from a local farm down the road! Honestly, if I had known how yummy it was, I would've taken a bigger handful! 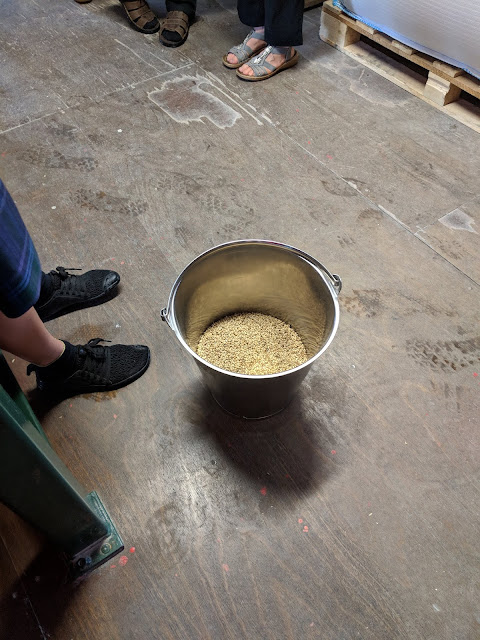 Walking through the distillation portion of the tour took about 15 minutes and we got to see almost everything. We weren't able to watch the peat fire smoking and drying process, but this was only because it is now done offsite. 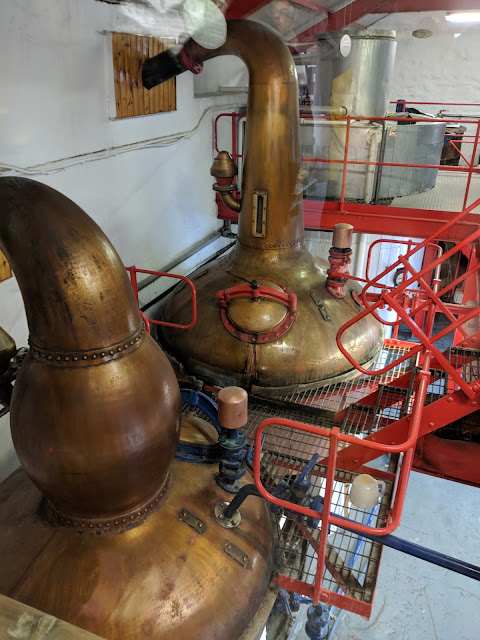 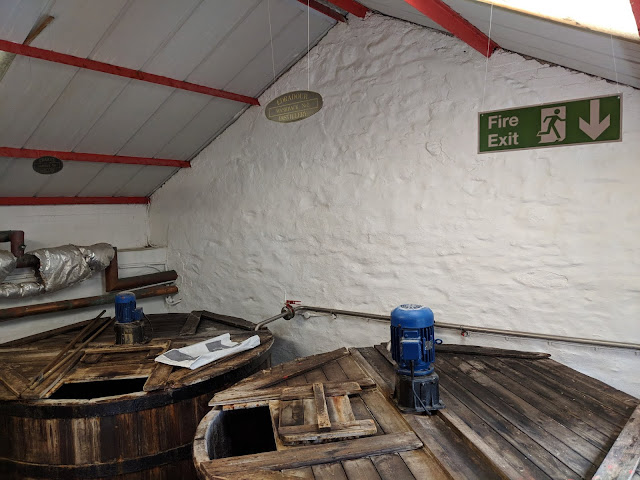 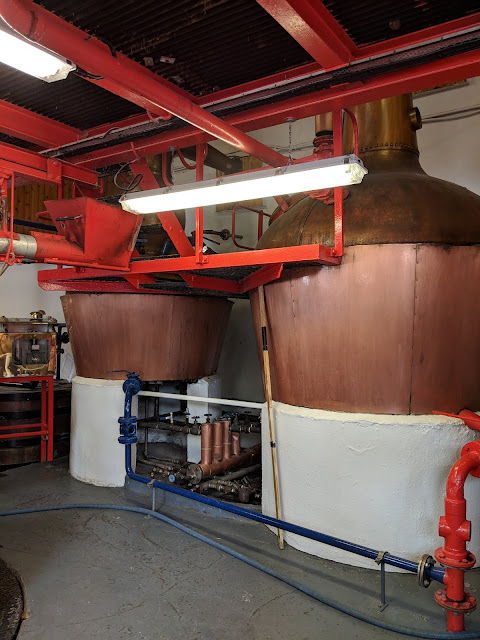 It was a distilling day, so we got to see the master distiller hard at work! 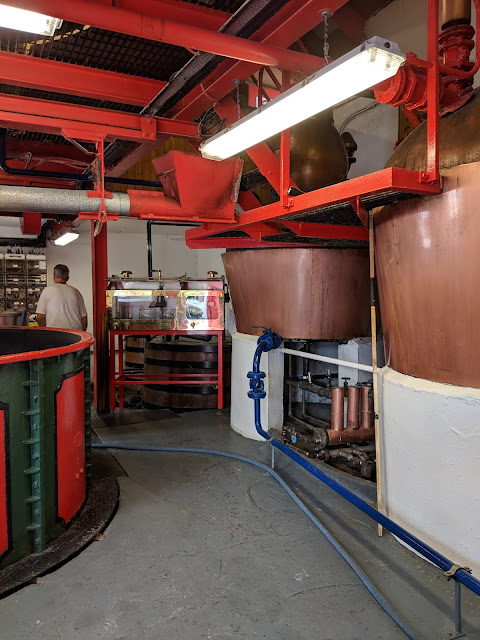 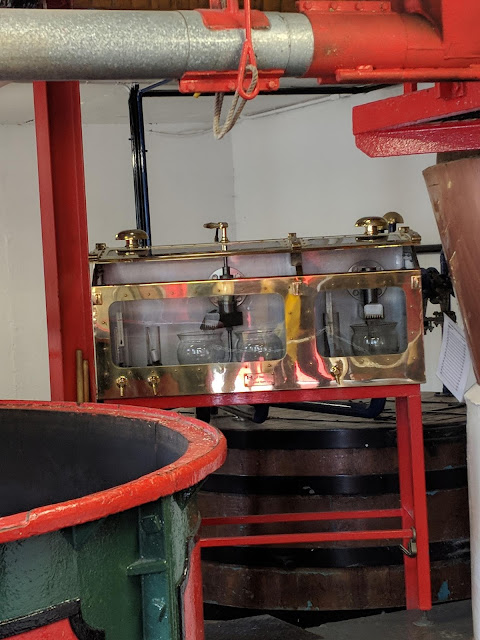 We left the distillation room and headed to the warehouse, where the spirit is aged. This was my favorite part of the tour. It was warm and dry in there on a chilly, rainy day, and it smelled heavenly! This was because of all of the evaporating whisky. 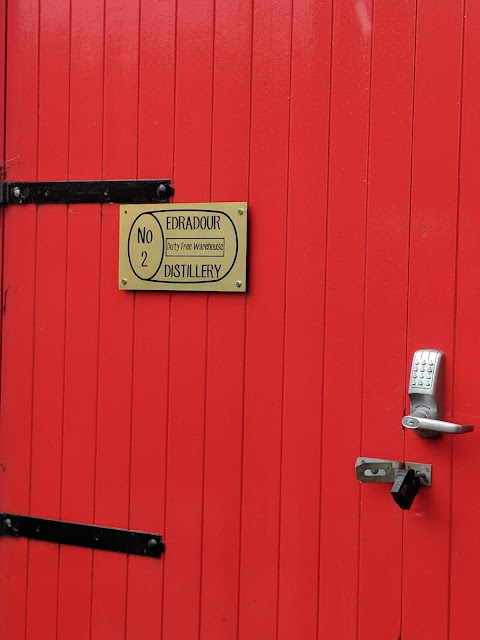 About 2% of the total liquid in each barrel is lost to evaporation. Distillers didn’t always understand the process whereby their Scotch was disappearing. In the early days of Scotland’s long whisky-making history, distillers were baffled that there was less whisky in a finished barrel than they had initially put in. The only way they could explain the phenomenon was that angels took a portion of the delicious whisky out of the casks for themselves as a sort of tax, hence the term “angel’s share.” The longer the whisky was aged, the myth went, the more the angels taxed.

This unavoidable circumstance is both a blessing and a curse - one of the biggest reasons alcohols like whiskey are aged in barrels is to remove some of the undesirable parts of it. The “angel’s share” phenomenon further helps with the maturation and smoothness of the liquid. 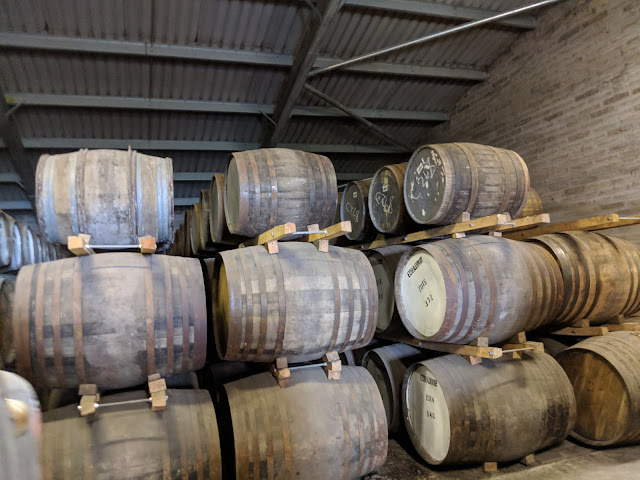 Some of the barrels have been purchased from other distilleries. You can see a Glenlivet barrel in the photo below. 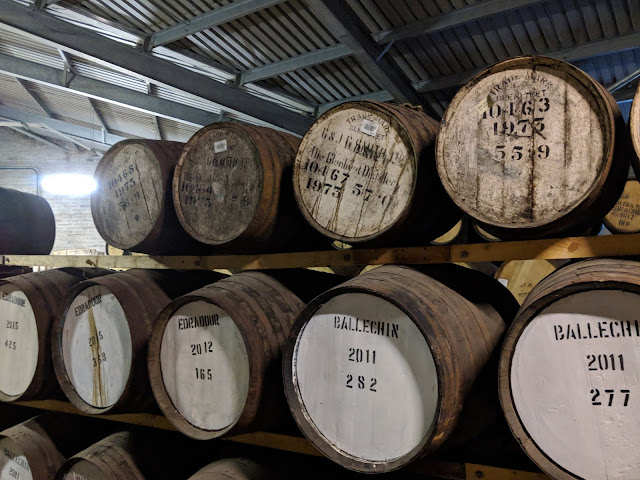 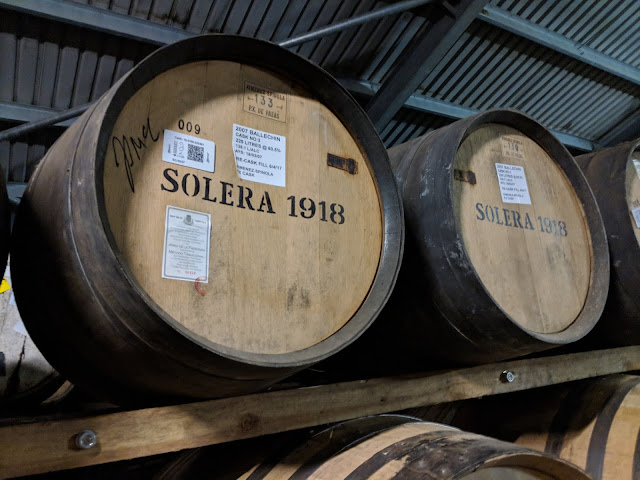 Pictures don't do the size of this barrel justice -it is huge! You can see the forklift waiting nearby to move it when the scotch inside is ready to bottle! 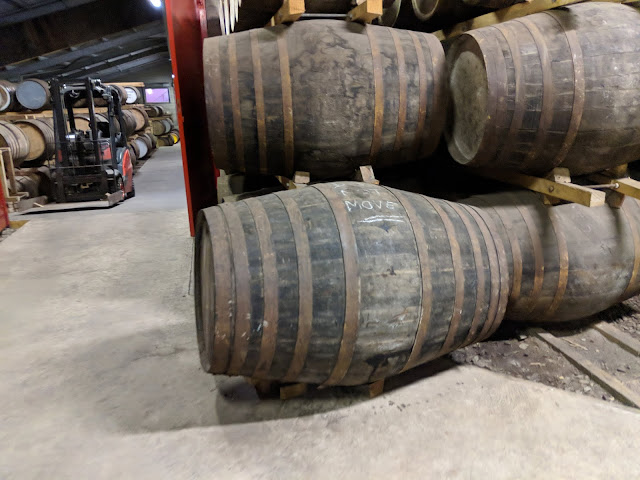 The number of whisky casks in the warehouse was staggering. Lucky angels. 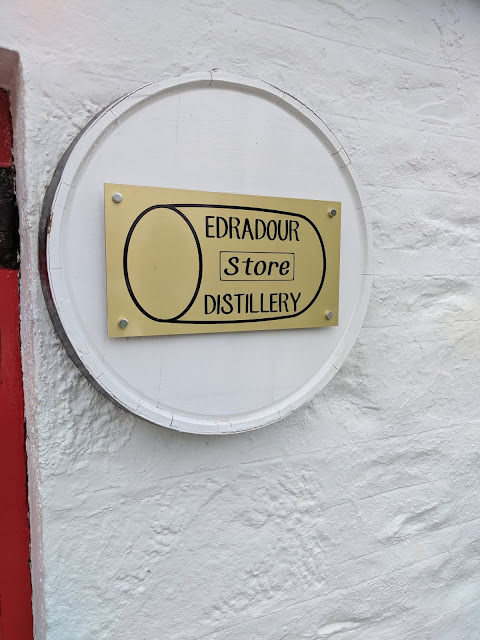 Our tour finished in their store, where we enjoyed browsing the products. We bought a small bottle of Ballechin to take home with us, and we still have not finished it. We are savoring it because we can't buy it here in Pennsylvania. 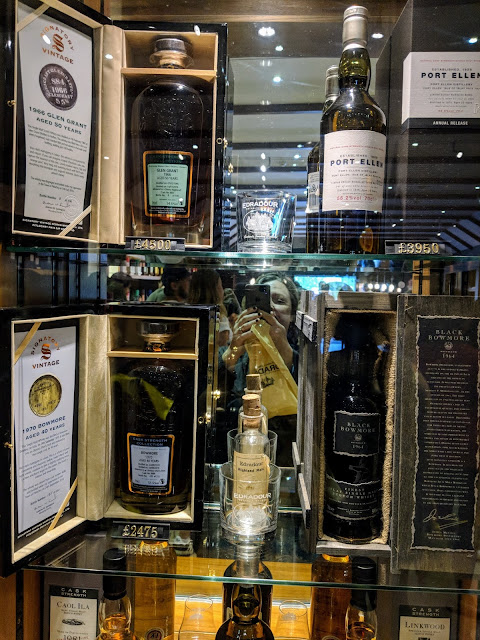 If you ever find yourself in the Scottish Highlands, I highly recommend a visit to this family-owned distillery. It has been here since 1825! Reservations are not required, though you must be 18 to participate in the tastings, and children under 12 are not permitted on property.  If you decide to go, I have a wonderful lunch recommendation near there - just ask!
Labels: angel's share distillery outside the lines travel scotch scotland scottish highlands tour whisky

Travel Insurance -- Is it really necessary?