This is part two of Ashley's trip report on her family's summer 2019 Alaskan Cruise! Ashley Harris is one of my favorite Outside the Lines Travel clients. You can read Part One HERE, which talks about the port towns and excursions they chose on their Alaskan Cruise.

After our many port adventures, by this point in our cruise, we were ready for our first  'At Sea' day. In the morning, three park rangers hopped on a pilot boat as we entered the Glacier Bay, rode out to our big ol’ ship, climbed a rope ladder above the frigid, yet beautiful, turquoise water and narrated the majority of what we saw during the day.

This is where having a balcony room really paid off. The boat glided—the water is literally like glass—slowly into different parts of the bay and did a 360-degree turn in front of each glacier so both sides of the ship had an awesome view. 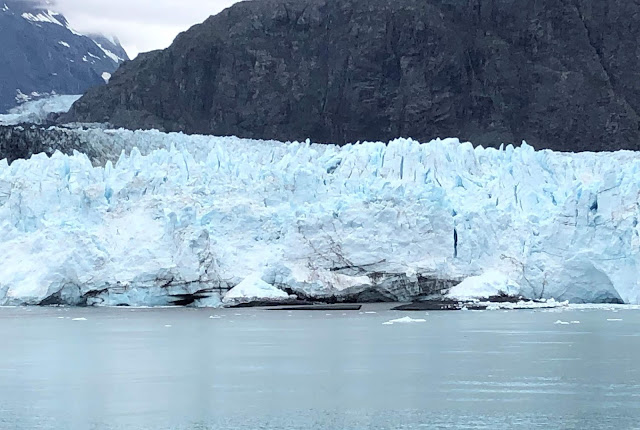 When we were 1/4 mile in front of the biggest glacier, the huge Margerie Glacier, we saw some calving take place. Calving occurs when pieces of the glacier break off and fall into the water. Right before they broke off, we would hear cracking and popping, then see a slow motion splash.

The rangers also conducted a few casual lectures where they gave out facts on the glaciers and told the history of the region. We saw pictures from a John Muir expedition in 1899, and it is unbelievable how much of the glaciers have disappeared since the photos were taken. The loss is a natural occurrence, but what is not natural is the rate at which it’s occurring. I feel very lucky to have seen the glaciers as they are now; they looked like fudge ripple ice cream from the striations of rock they picked up on their journey. 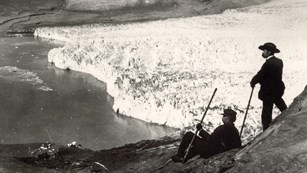 We saw some sea life while the ship was floating around, including what might have been a sea otter floating on its back. Or it might have been the back of a whale but I couldn’t get my new binoculars focused in time to confirm. It was quite chilly (42 degrees) when we first started passing the glaciers, but then warmed to 62 as the day went on.

Around 3:00 that afternoon, the park rangers shimmied back down the rope ladder to board their pilot boat and headed back to shore.

As an aside, if you have children, I highly recommend the kids’ clubs on board. At least for the older kids, there is no charge and the clubs provided some time for our boys to meet kids from around the world and take part in activities such as scavenger hunts and dance parties (even if they didn’t dance)! The clubs also gave us a welcome break from each other when we had a sailing day.

Sea day (Hubbard Glacier): As we cruised towards Seward, we did a brief float-by of the Hubbard Glacier. At its widest point, this glacier is six miles wide and the face (the cliff-like part) is 400 feet high. We couldn’t see the entire width but could see the face. However, as we had no point of reference, it was hard to really appreciate its height. As our ship slowly approached the glacier, we could hear a clacking sound that turned out to be the ship moving through all the ice littering the top of the water. And, we couldn’t get that close to this glacier because it’s known for its shooters. Shooters are pieces of the glacier that break off underwater and come shooting up out of the water. Not a good thing for ships. (Think Titanic part 2). 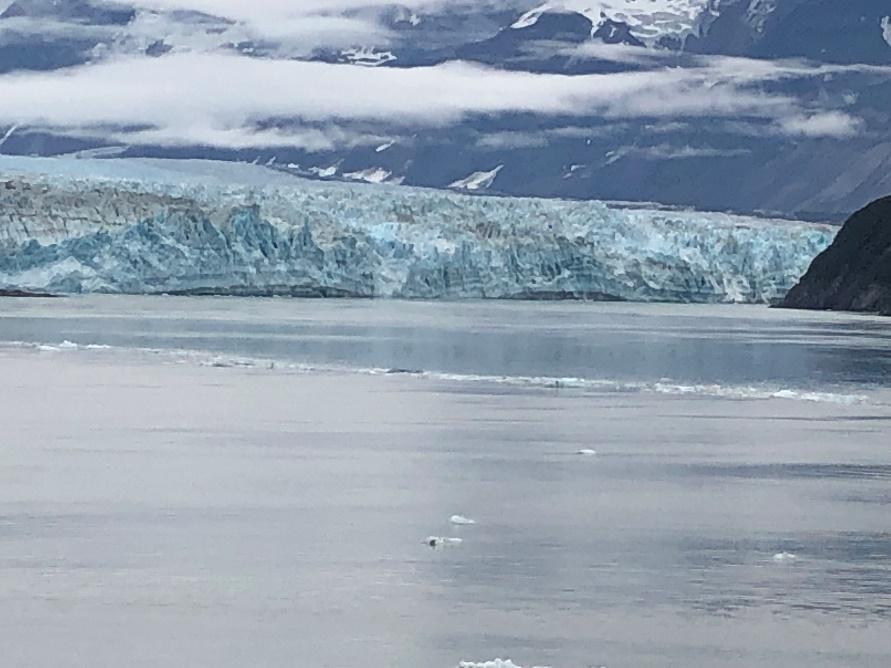 After another slow turn so everyone could get a good view, we headed back out into the Gulf of Alaska toward Seward.

Disembarkation day (Seward and Anchorage): When we arrived in Seward and I looked out at the town, the first thing I saw after the beautiful mountains and packed marina, was a Waffle House. That’s how I knew we were back in the “big city.” From here, we rode a motorcoach into Anchorage to pick up our evening flight. We wanted to ride the train back, but the times didn’t work with our flights.

After we disembarked the ship, we boarded a bus for the 2 ½ hour drive along the scenic bypass (aka the Seward Highway) to Anchorage. As with most everything else we had seen on our trip, the drive was breathtaking. Along the way, our driver told us stories about the history of the area and how people live through the winter. 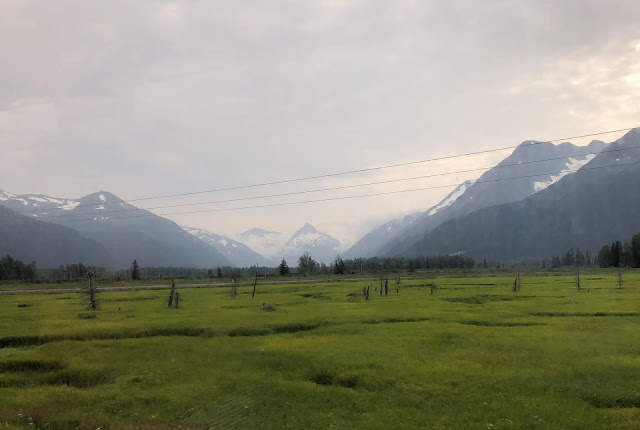 Story 1: There are parts of the are that are on hour outside of Anchorage, yet are zoned for Anchorage. However, since the buses don’t run in the bad weather, the kids who live outside of town get foster families in town where they stay if the roads are too bad to get them home after school.

Story 2: The big 9.2 earthquake that hit in 1964 completely wiped out some small towns along the highway. The tidal surge is what got them. The water came in at 500 mph and there was nothing left, not even building foundations. In Anchorage, we passed by the historic theater whose marquee was found lying on the ground after the quake.

Story 3: Our bus driver was driving kids to school one day and a moose walked out in the road with a swing set around its neck! The set belonged to a little boy in the bus. Animal control tranquilized the moose, removed the swing set, and the moose ambled off. The little boy was very happy :)

In case you are curious, here is a map of our cruise itinerary: A little after noon, the motor coach dropped us and all of our luggage at the Anchorage Hospitality Center. With our plane not leaving until 8:15 pm, we had some time to explore. The nice people at the Center kept our luggage (free of charge!) and we set out to have lunch and walk around. After a tasty meal that included fresh salmon, we explored some shops, bought some souvenirs, and enjoyed the 71-degree sunny weather. There are lots of beautiful flowers here—the city has a hefty floral budget and its own greenhouse where they grow more than a million flowers each year. They also have a “planet walk” around the city that starts with the sun and has a stop for each planet in our solar system. We only had time for the sun, but it was something different. 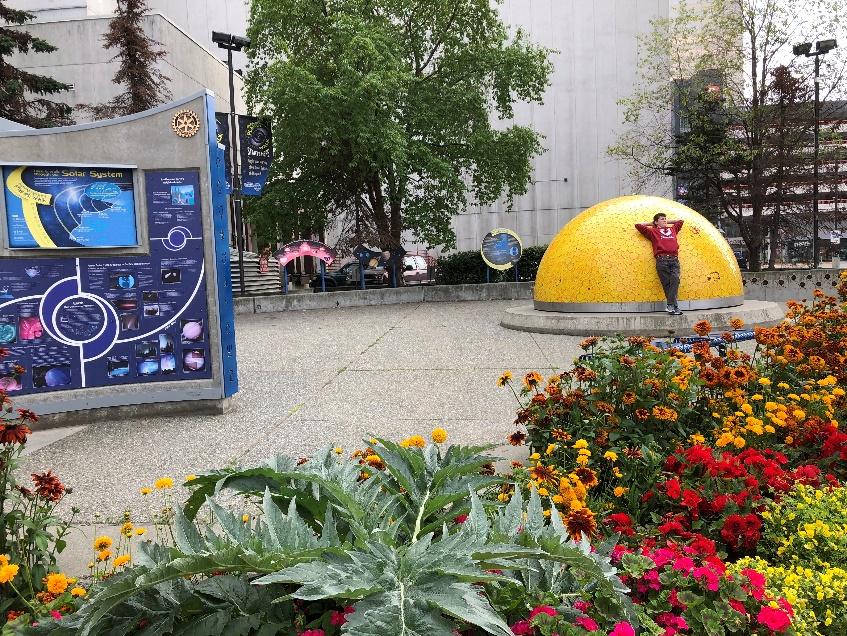 We had a wonderful trip and I’m so glad we were able to experience Alaska. If seeing Alaska and its glaciers is on your bucket list, I would definitely plan a trip sooner rather than later.
contributing blogger: Ashley Harris, April 29, 2020

Outside the Lines Travel can help you choose the best cruise line and best itinerary for your trip! 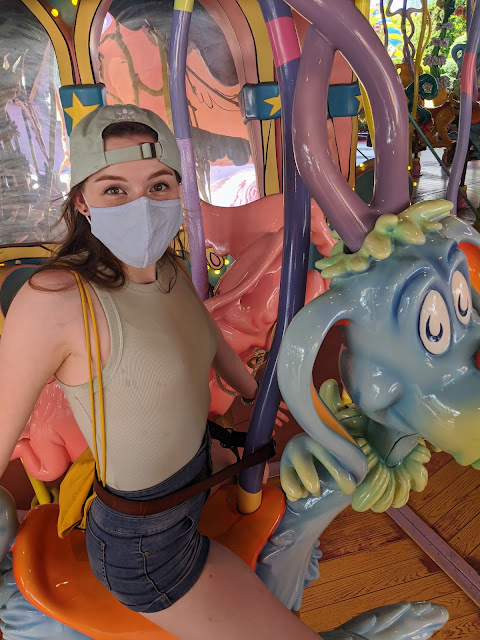